From Lucy 4.7.7 version one has the possibility to choose which Awareness scenarios are mapped to a particular Attack scenario. Imagine you're currently running a campaign that includes four attack scenarios aiming to test users capability to recognize and avoid various phishing attack types (e.g. file-download, hyperlink attack, or data entry). In such a case it makes sense to send awareness to users accordingly to the attacks that they failed to recognize. For example, user did not click on a malicious link and avoided entering any data in some attack scenarios but fell into downloading malware simulation file that disguised as an internal document and appeared as an attachment to the fake newsletter. User's result implies that he or she is aware of possible hyperlink attacks but doesn't know how to recognize a file-attack. Thus, there is no need to provide a user with a complete A-Z course on avoiding phishing that will take an hour of his busy schedule. But it makes sense to send him a short awareness describing precisely what a file-attack is and how to detect it. And here comes Awareness scenarios bounding.

How to bound attack scenarios

On the Awareness Settings tab, one can review which attack scenarios are bounded to awareness. 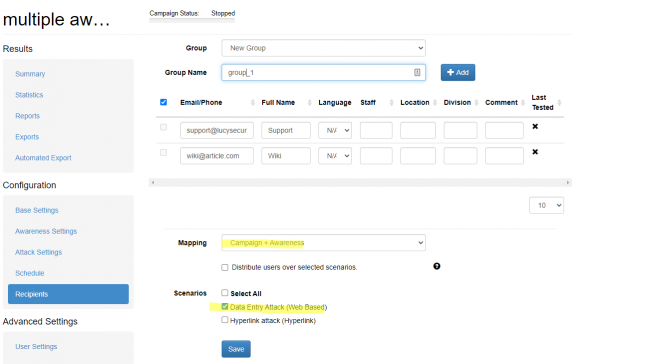 Please note: In case End User Portal feature is involved in a training process there is no need to create several recipient groups, bounded pieces of training will appear in Portal at the moment user fails an attack. The feature is rather complex to embrace, especially when talking about sophisticated campaigns and never-ending employee education process. So make sure you have a rigid plan of what awareness goes after what attack and to which recipients and test your structure before running a campaign!