As the first step it is highly recommended to setup Domain and SSL. However, it is not necessary. MSI plugin is able to work with no SSL over IPv4.
This step is a must to make O365 plugin operational, it can not operate via IP address.

Also, with the domain name configured you can create an MX record for the owned domain name to receive reports over SMTP protocol.

At this stage, if an MX record is configured, the Screener is already able to accept the reports. Simply forward a suspicious email as an attachment to the anyname@yourdomain.com.

Configure the plugin in Settings → Plugins.
it is necessary to define, which version is going to be used, O365 or MSI.

Configure additional users if necessary.
Each user has equal permissions, but it is possible to configure different timezones per user.

The screener always listens to port 25, so in case if you are planning to report incidents over SMTP, it is enough to create an MX record of the screener domain.

For example:
There is a domain name screener.com pointing to the instance. Simply use randomemailaddress@screener.com and the Screener will accept the report.

It is possible to review the incoming incidents.
The system will do an automatic analysis of an incident as soon as it is received.
The automatic scan will happen according to the Analyze rules. It will receive some spam score.
The amount of the spam score is unlimited, however, it'll be cut of to 10 since it is a maximum value for an incident. 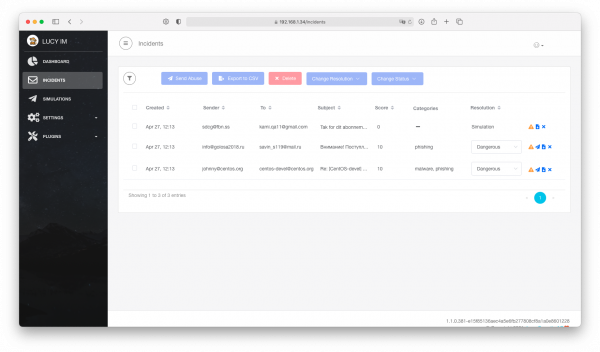 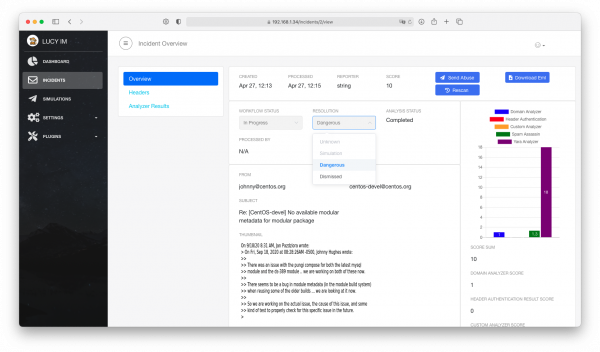